Fortified by over 80 years of experience and a strong team of more than 500 employees, Summers-Taylor is a leading materials producer and heavy construction contractor.

Summers-Taylor, Inc., was founded in 1932 in Elizabethton, Tennessee, originally as a general maintenance and construction contractor under the name Taylor Construction Company.  Named after its founder, Lines R. Taylor, the business initially server two large German-owned rayon mills that had located in Elizabethton during the 1920s.  The company was given license number 00000069, meaning it was the 69th contractor of any kind to be licensed in the state of Tennessee and currently has the 3rd oldest license amongst companies still operating today.

The advent of World War II and the eventual nationalization of the two rayon companies led to additional work for Taylor Construction, accelerating its growth.  The company also won contracts to build local schools, hospitals, and retail stores. 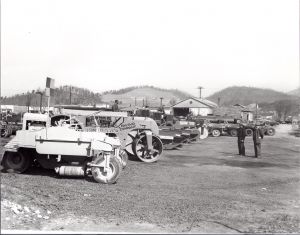 In 1948, Summers also founded a paving business called Summers-Taylor Paving Company, which was extremely successful and grew quickly, with sales increasing from $237,000 to $849,000 by the end of just the second year. 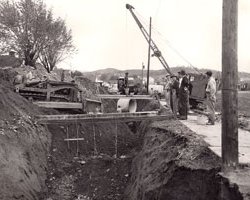 In 1963, Lines Taylor passed away and Robert W. Summers assumed leadership of all companies.

In 1970, all three businesses – Taylor Construction, Taylor Ready-Mix, and Summers-Taylor Paving – were combined under the company’s current name of Summers-Taylor, Inc.

As Summers-Taylor’s physical structure on Elk Avenue has been expanded and renovated several times over the years, the company’s volume has achieved a steady trajectory of growth through four generations of family-guided leadership.  When Robert Summers, son-in-law to company founder Lines Taylor, died in 1981, his son, Rab, took the helm.

In 1989, the company purchased Malone Brothers, an asphalt paving and grading company in nearby Greeneville, TN.  The Malone acquisition increased the capacity and efficiency of the paving operations.  Former Malone employees were welcomed into the company and formed the lifeblood of the paving crews for many years.

In the early 2000s, Summers-Taylor management made the decision to diversify into two key areas: utility work and bridge construction.  This allowed the company to turn-key perform all aspects of road and site construction.  It was a key strategic move to better allow the company to control its own destiny on most jobs.

In 2013, longtime executive Billy Chandler retired and Rab’s son Grant, representing the 4th generation of family leadership, assumed the role as President.  Ted Bryant, who was part of the Malone Brothers and who had worked for the company since that acquisition, assumed the role of Executive Vice President.  The new leadership, backed by an extremely strong team of managers across all divisions, was able to oversee a period of growth in volume and in acquisitions.  Two acquisitions in the concrete division occurred in 2017: Cloud Nine Enterprises and East TN Concrete.  These purchases expanded the company’s reach and capacity in ready-mix concrete to the west, all the way to Jefferson City and especially in the Morristown/Mooresburg and Rogersville regions.

In 2018, a momentous merger with Simpson Construction, of Cleveland, TN, was accomplished.  This combined two of the oldest and most respected family-owned businesses in the state.  It also brought a massive wealth of knowledge and experience in the bridge-building industry, to combine with Summers-Taylor’s own strong bridge division.  The Simpson Construction organization operates as a division within Summers-Taylor and adds tremendous capabilities.  Ross Prestress, another Simpson Company, was also incorporated.

Summers-Taylor is positioned extremely well for years to come, having the best people and equipment available to perform its work.

On every job, we promise top-quality work, completed in a fast, safe, and environmentally-friendly manner.

Embedded in our culture of hard work, honesty, and getting the job done, our history not only tells about our past but also our present. Our record of succeeding, surviving, and striving to be the best is central to our reputation today.

We Are Always Improving

Through commitments to Green initiatives and more efficient processes, we are always looking for ways to improve the products and services we provide.